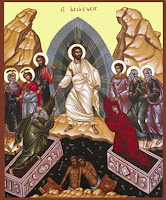 Whoa – we have finally finished studying the Gospel of John!  It was seven weeks of intense spiritual discovery and intellectual query.  It took a lot of effort, a lot of work, and I drank a lot of beer at Barnett’s, but it was totally worth it.

Last night we covered the crucifixion and resurrection passages.  There we were, a band of eighteen disciples gathered around some pub tables, remembering the stories of Peter’s denials, Pilate’s sentencing, the release of Barabbas, and the death of Jesus.  Together we said aloud, “Crucify him!  Away with him!”  I think that we scared off some of the other bar patrons; though it may have been bad for business, I believe it’s good for the Church.

Since the demise of Christendom, the Church as a body has all too often retreated into its buildings and comfort zones to talk about Jesus.  Then, because nobody on the outside knows about us, we die away and our buildings crumble to dust.  The Church is not a building, but a gathering of people.  And people noticed.  Because of our Bible study at Barnett’s, I’ve met some regular bar patrons who have expressed interest in attending our church and who say that this is the first time they have seen Christians publicly confessing their faith in a non-weird sort of way.

We had a church service last night at Barnett’s because we shared (liquid) bread and remembered the stories that give life and indeed are life.

Jesus was known to us in the scriptures and in the breaking of the bread.

One thought on “church on the move”