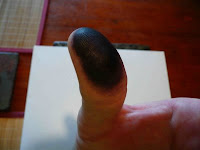 After imposing ashes on the foreheads of nearly one hundred people yesterday, my thumb was super dusty last night (no, that’s not my thumb in the picture, it’s just there to stoke your imagination).  I told everybody from a 99 year old to an infant that they are dust, and that to dust they will return. How sadly, and how comfortingly true.

One man I know, let’s call him Ethan, called with terrible, downright gut-wrenching news.  His son was shot in the head during a fight.  As of now, they’ve made organ donation arrangements and are ready to “pull the plug.”  He is only 18, yet still he is only dust, and to dust he is returning faster than anybody wants.

In January one of our choir members died from an aggressive cancer of the brain.  I talked with her on a Thursday, and just two weeks later, she was dead.  I pray that her ashes may rest in peace and that she may rise in glory.

We are dust, and to dust we shall return.  But our hope in God is that we don’t stay dust.  Our hope is that God is more powerful than dust, stronger than the grave.  My hope in God is that my blackened ash underneath my fingernail is only a temporary sign of this age of death and despair.  Some Day those ashes will be counted as nothing – and what has died will be made new again.

O God of unchangeable power and eternal light: Look favorably on your whole Church, that wonderful and sacred mystery; by the effectual working of your providence, carry out in tranquility the plan of salvation; let the whole world see and know that these which were cast down are being raised up, and things which had grown old are being made new, and that all things are being brought to their perfection by him through whom all things were made, your Son Jesus Christ our Lord; who lives and reigns with you, in the unity of the Holy Spirit, one God, for ever and ever. Amen.