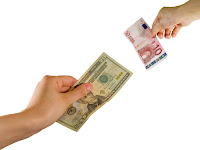 I have to talk about it: gays and lesbians.  All sorts of questions and accusations are flying around the country and the church.  I think much of it is unhelpful if not harmful.  Some of it is thought provoking.

For some Christians, one of the passages used to denounce homosexuality is Romans 1.  Throughout the second half of this chapter, Paul condemns those who have “exchanged” things.  Some of have exchanged the glory of the immortal God for idol worship.  Some have exchanged “natural intercourse for unnatural” (v. 26).  Where does this image of exchange come from?  Did Paul create it out of thin air to condemn homosexual practice?

As a matter of fact, he didn’t.  Speaking through the prophet Jeremiah, the Lord condemns the people of Israel with these words: “But my people have changed their glory for something that does not profit” (2:11).

I would have to answer no.  Some gays and lesbians may have “changed” their sexuality for vile or base reasons.  But this is no worse than what many straight people have done.  On the other hand, I know a good number of gays and lesbians for whom “coming out of the closet” or practicing their homosexuality has indeed been profitable.  I have seen true caritas shared between same-sex couples.  They have not traded one worthy thing in exchange for an unworthy one.  Rather, they have participated in something which gives great profit and mutual joy.