The story of Naaman’s healing in II Kings 5 is one of my favorites.  Naaman is a commander of the Aramite army, Israel’s seasonal foes.  As it happens, Naaman, “thought a mighty warrior, suffered from leprosy” (5:1).  He’s a strong, implacable foe with the sword and chariot, but he falls just as easily as any other man to disease.

Naaman hears of a godly man in Israel who has the power to cure, Elisha.  But when Naaman comes to Elisha, all Elisha says to Naaman is to go and wash in the Jordan seven times in order to be made clean.
This infuriates Naaman.  “I thought that for me Elisha would surely come, and stand and call on the name of the Lord his God, and would wave his hand over the spot, and cure the leprosy!” (5:11).  Hmmm, so Naaman didn’t actually desire healing, he wanted a magic trick.  Puffed up by his pride, he thought that since he was such a mighty warrior, he would deserve something special. 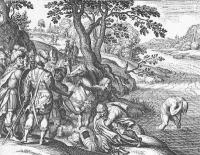 His servants are the perceptive ones.  They approach Naaman saying, “If the prophet had commanded you to do something difficult, would you not have done it? ”  This turns Naaman’s heart.  He swallows his pride and immerses himself in the measly Jordan River, not the greater rivers of his homeland, and submits himself to Elisha’s orders.
And he is healed.  The leprosy leaves him.  Yes, that is a great miracle from God.
But the change in Naaman’s heart is the greater miracle.  Pride is the one thing that gets us every time.  The Greeks called it hubris, Paul writes of being “puffed up,” we diagnose it as narcissism.  It doesn’t matter what we call it, what matters is how it gets in the way of letting God work in our lives.
Naaman’s pride almost hindered him from being healed.  But he eventually submitted, and not only was his body healed, but his pride was drowned.  This allows him to make the most important acclamation of his life:
“Now I know that there is no God in all the earth except in Israel” (5:15).
Pride may not kill us.  But chances are it is the one obstacle between us and a fuller life with God.