The San Francisco 49ers and the Baltimore Ravens. This is it. This is the Super Bowl. Think of what the players have done – the grueling summer workouts, the exhausting regular season schedule, the nerve-wracking playoffs. The now famous, “Flacco Fling” and that wonder-kid, Colin Kaepernick. All the hard work, all the emotions – it all comes down to four quarters of good old fashioned football. We all have our plans – the ribs, the buffalo wings, the chili, the nachos, the “beverages.” It’s game time. It all comes down to the players and the coaches. Well, until the referees get involved. 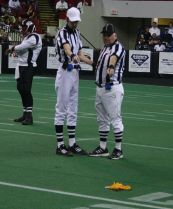 Ugh, the referees. The zebras. You football fans – do you remember how poorly this season started with referees? Remember the infamous “Touchception” debacle in that game between the Seahawks and the Packers? When the referees couldn’t make up their minds if it was an interception or a touchdown? When it seemed as if all the rules were just tossed to the wind?

Today, being Scout Sunday, we have a whole crop of rule-followers here in church. For Boy Scouts, the Scout Law and Oath are the set of rules that everybody agrees to follow. That a Scout is, among other things, trustworthy, loyal, brave, obedient, thrifty, clean, reverent. And that a Scout must, on his honor, do his best. And just as the refs will throw some yellow flags tonight at penalties, I know that the adult leaders of these Boy Scouts make sure that all the boys follow these rules as best they can.

And strangely enough, we hear this morning, that it’s okay to break the rules. In St. Paul’s beautiful poem we heard on love, the passage from 1 Corinthians that is read at just about every wedding, we hear about tearing down the norms, and by living with a new rule.

See, the prophetic powers, and the knowledge of mysteries, and the boundless faith are good and all, but they’re not the greatest thing. Love is. Love is what matters, not the rules or the things that are nice to have.

You Boy Scouts, you know that following the Scout Law is a good thing. But because I’ve been camping with the Boy Scouts a lot in my life, I know that sometimes, you’re going to break the Law and Oath. For instance, I know that in Boy Scouts, you’re going to get a little dirty. Being clean is good and all, but sometimes you have to get a little dirty to build a fire or pitch a tent. Being cheerful is good and all, until you have to tell somebody bad news. Do not be concerned so much with following the rules. But focus on doing what is right.

As Christians, we know this at our very core. Love is our guiding principle. All the rules take a backseat to loving our neighbor, loving our enemy, and loving God.

And sometimes it would be a whole lot easier if we didn’t have to love. If all we needed was to understand some “spiritual mystery,” that would be easy! Sunday School would solve all our problems. But it’s this loving my neighbor as myself thing that’s tough. Even that neighbor that blasts hip-hop music until four in the morning. If all we needed was faith to remove mountains, that would be easy! We would just need to show up at church more often. But it’s this loving my enemy thing that’s tough; even loving a terrorist.

And Jesus, boy that Jesus sure was good at breaking rules in the name of love. Every rule and norm – thrown to the wind in the name of love. It was a good thing for Jesus to rest on the Sabbath, but it was love that made him break the rules and heal a man with a withered hand. It would have been a good thing had Jesus not been crucified, but it was love that put him on the cross.

Say Jesus had followed all of the rules; and if at the end of his life, Jesus had died peacefully in his sleep. Then nobody would have cared. We wouldn’t be here today. We wouldn’t know love like we do now. Jesus would have been just another of the billions of humans that come and go. But it was love, and it is for love, that Jesus is remembered. Because doing all of the “right” things would have been good, but it was love that rose Jesus from the grave.

At the end of the Super Bowl tonight, the rules won’t matter. If Ray Lewis has won a Super Bowl ring, he’s not going to care if he was caught pulling on somebody’s facemask. And if he loses, Ray Lewis won’t be saying, “Well, I’m really happy because I wasn’t penalized.” No. It’s all about the winning or the losing. Referees don’t walk away with Super Bowl rings, players do.

You will not be remembered for doing all of your chores, or for following every word of the Scout Oath or the Scout Law. Your children and your grandchildren won’t remember if you do all the “right” things. They won’t care if you always drove the speed limit and stopped, completely, at every stop sign. You will be remembered for the love you shared. At the end of your life, your faithfulness to God will not be measured by how many rules you kept, but by much love you gave.