I needed a translator. Badly. There I was in an old beat up Volkswagen bus in some dingy back corner of the Dominican Republic. We bumped down the road full of pot holes, blasting merengue music. The driver yelling at pedestrians and beating on the side of the door, trying to drum up business, and not even slowing down for stop signs or red lights, but driving like a man possessed. And there was this young girl sitting next to me. Pawing me. Making suggestive glances. Speaking in blazing fast Spanish. This was public transportation in the Dominican Republic. I needed a translator. Badly.

Then there was this guy in the front row, flashing his pistola. Making menacing glances at me. Speaking in blazing fast Spanish. I needed a translator. Badly.

To make a long story short, as you can see, I escaped that VW bus unscathed. With my heart in my throat, I nearly jumped out of that VW bus when I saw the Episcopal Church to which I was headed, and ducked inside. All this happened during seminary, when I went to go study in the Dominican Republic. See, seminary was more than just praying in a quiet chapel and learning ancient Greek. Seminary was about getting hit on by Dominican girls. Seminary was about almost getting mugged. In a sense, what I learned at seminary, was that everybody needs a translator.

When you are learning the language of love – God’s language – sometimes you’re going to make a fool of yourself. You won’t get it right. Your prayers may be self-serving and shallow. But that’s alright, you have to start somewhere. You may not think that Jesus really meant the whole “forgive your neighbor thing”- but that’s okay, you’ll get there. You’re still learning the language of love. Nobody becomes fluent overnight.

But just because you are not fluent in God’s language of love, doesn’t mean that you shouldn’t try to speak it. Because the world so desperately needs to hear of God’s love. You don’t need me to tell you that. Our families, friends, neighbors, and those who are alone are thirsting for a language, they want to hear that sweet language of God’s love. If only somebody will translate for them. The world needs a translator. Badly.

This is exactly what the disciples did on Pentecost. They took God’s native language of love and translated it to the peoples gathered in Jerusalem. The disciples took what they had received from God – this all-encompassing love – and told anyone that would listen. Parthians, Medes, Elamites, Mesopotamians, Judeans, Cappadocians, Asians, Phyrgians, Pamphylians, Egyptians, Libyans, Romans, Cretans, Arabs. The disciples translated the love of God that they felt in their own hearts, to the people gathered there. The disciples made fools of themselves. They didn’t conjugate all their verbs correctly. They spoke with funny accents. The disciples weren’t fluent in God’s language of love, so much so that the crowd thought they were drunk. But all the same – they tried. They spoke of God’s love using whatever means available.

Now we come to another crossroads. Facebook. Twitter. Instagram. Tumblr. Reddit. Google+. This is the social media revolution. One billion people are on Facebook. That would make Facebook the third most populous country in the world. Revolutionaries in Tunisia and Egypt coordinated their uprisings by using Twitter. These are powerful, powerful tools. And we, as the Episcopal Church, have an opportunity.

Because this is the way of the world. Katherine, who will be baptized this morning, is growing up in a digital, screen-filled world. And if the Church wants to translate God’s love to her and her generation, then we need to speak her language. Imagine if Martin Luther had said, “phhhh, who needs the printing press? We can still copy things by hand.” Imagine if the Methodists had said, “phhhh, who needs this telegraph thing? We’ve still got the Pony Express.” Katherine will not grow up with a book in her hands, much less a telegram. And that’s not really the point. The point is that the world desperately, desperately needs to hear God’s voice of love, and we have to speak it. Or write it. Or type it on a screen with our thumbs. 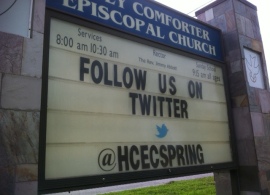 Some will scoff at this. Some will say that it’s silly for the church to do such things. Some will say that Facebook and Twitter is all a waste of time. Just like the scoffers thought the disciples were drunk. But they weren’t drunk – they were filled with the Spirit of God. They were translating God’s native language of love.