In ancient days, there stood a great temple on Mount Zion. This great temple was at the pinnacle of the holy city of Jerusalem. This great, beautiful temple was the focal point for all Jews. Now, there were three sections to this temple. The outer court was where everybody could go; clean and unclean. As you made your way farther in, you came to the nave, and the nave was reserved for those who had been ritually purified. But then, beyond that, stood the Holy of Holies. The Holy of Holies was where it was believed God’s presence dwelled. That was where the ark of the covenant stood. That’s where Isaiah saw a vision of the Lord God, a vision so grand that only the hem of God’s robe filled the entirety of the temple. 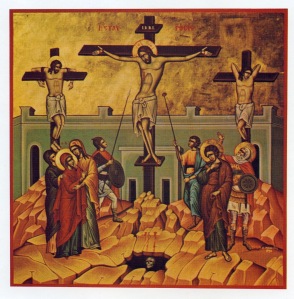 Palm Sunday, this holy day, is the complete reversal of everything that took place on the Day of Atonement inside the Temple. I hope you see the irony. I hope you see the juxtaposition between the Day of Atonement and Palm Sunday. God does not dwell inside the Holy of Holies behind a curtain. God dwells on a cross outside that holy city. While the Temple stood on Mount Zion, Jesus is raised on another hill – Golgotha, the place of crucifixion. God does not live behind a curtain reserved for only the purest people. No. God dwells on a cross in the midst of scoffers and imperial henchmen. God dwells naked, and bleeding, with arms stretched out on a cross; totally exposed to the whole world.

The ancient idea was that if a human saw God, then the human would surely die. But again, notice the irony. The reverse is true. Palm Sunday reminds us, in gruesome fashion, that when humans see God, it’s God that dies. It’s humans that kill God. This world, and our human societies cannot accept the love of God. So we put God in a box, or behind a curtain, or on a cross. In a harsh way, I pray that you leave today haunted; haunted by our desire to have Barabbas released instead of Jesus. Haunted by our cry, “let him be crucified!” Perhaps that curtain was there in the Holy of Holies not as a way to protect humans from God, but as a way to protect God from us.

But that very curtain is torn in two at Jesus’ death. Rent from top to bottom, the veil that had kept humans and God at an arm’s distance is done away with. God’s presence can now be seen by everybody – the purest high priest, the ritually cleansed, and yes, even the most despicable sinners and outsiders. This is a word of warning to all of us who would pretend that we are pure. And it is an image of hope to all those who have been cast aside by society for being sinful. The curtain is torn down. God shows up on a cross between two bandits. And the whole world sees a God that does not dwell safely behind a curtain.

So beware. God is on the loose. God is not hidden behind some human fabrication. God does not fit into our box, or behind our curtains. And even if we don’t want to hear it, we know that Jesus is not with the powerful and mighty. Jesus is condemned as a political radical and killed by a foreign empire. Jesus dies a solitary death in cruel fashion, and yet God is there. In fact, I would say that God is most fully present in the world in places with others who are naked and bleeding and dying needlessly. If you want to see the crucifixion, if you want to see Jesus in solidarity with the people of this world, then Google images of Sandy Hook Elementary or just this week in Murrysville, Pennsylvania. Look at pictures of Indonesia after the tsunami, or Haiti after the earthquake. If you want to see images of a God dying in solidarity with a harsh world, look no further than the emergency room on a Saturday night in downtown Houston. The Jesus that we know, the Lord that is crucified dwells with the hopeless and oppressed of our world. God could not be contained behind a curtain, nor can God be seen in pretty oil paintings or in cute little angel sculptures. Jesus is on a hill, naked and alone and bleeding and dying; abandoned by the world he created.

A feeling that is probably not so foreign to you. When you are suffering, when you are dying, when you are alone, when it feels that God has abandoned you – that’s when God is closest to you. When you hear of school shootings, and cancer, and suicide bombings, and famine – Jesus is there. These words are difficult to utter because they seem so radically untrue. Even Jesus cries out – “My God, my God, why have you forsaken me?” If you have ever felt that way, if you have ever felt abandoned by God, then you are not alone. You are with Jesus, because he has been there too.

Simply put – that is the good news of Jesus Christ. That a loving and merciful God is among us, and with us, most especially in our anguish and abandonment. The loving and merciful God dies on a cross, dies for us, dies with us. The good news is that the curtain has been torn. God is on the loose, and God is out there, in the world. And God is right here, with you. Palm Sunday, for all its agony and despair, is the good news of Jesus Christ.