In 1914, Sir Ernest Shackleton set out with a crew of men and a ship on a bold mission. The plan was for their ship, the Endurance, to drop him off with a small team on one side of Antarctica with dog sleds. They were going to sled all the way across the continent, transversing the South Pole, and another ship would pick them up on the other side. This would be a bold plan, even if they did have GPS which of course, they did not.

The Shackleton expedition did not go according to plan. In the 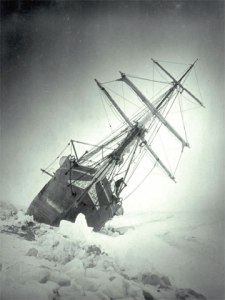 Antarctic winter of 1915, their ship became trapped in the ice and eventually sank. The entire crew of the Endurance, all twenty-eight men, made it off the ship safely. The remainder of their story is a picture of defiance. The crew of the Endurance camped on the ice, while the ice drifted nearly two hundred miles. The ice began to break up, so they took their lifeboats, which they had rescued from the Endurance, and through a harrowing journey, managed to sail to the barren rock called Elephant Island. But their plight was not over. More defiance was to come. Elephant Island is totally deserted. The men were living off penguin meat with no hope of flagging down a passing ship for rescue. So Shackleton with a few other men set off on one of their lifeboats in hopes of making it to South Georgia Island where a whaling station was located, that’s where help would come from. The voyage from Elephant Island to South Georgia Island is through nine hundred and twenty miles of some of the roughest, coldest seas in the world. With only a rudimentary compass and food for a few days, they defied the odds and Shackleton managed to land on South Georgia Island. Except for one issue; they landed on the wrong side of the island. Shackleton, with two other men climbed over thirty-six miles of treacherous, ice-covered mountains without climbing gear and only fifty feet of rope.

But they made it. They got the help they needed. The men left on Elephant Island were rescued. After two years of defying the odds, defying the Antarctic climate, defying death itself, all the men of the crew were rescued.

The act of remembering is crucial. In our busy, hectic lives we are prone to forget. We forget how Jesus lived for us and died for us. We forget the love of God. Sure, Jesus has done great things for us in the past, but what has he done for us lately? The Holy Eucharist is the reminder, the physical celebration that calls back to memory the saving deeds of Jesus Christ. But that’s not all it is.

Notice what Paul says: “For as often as you eat this bread and drink this cup, you proclaim the Lord’s death until he comes.” See, this meal is not just about remembering the Lord Jesus. It’s not just a stale bite of bread and a sip of wine. This meal is a proclamation. This meal is the image of defiance.

See, our world is afraid of death. We have sanitized, cleansed, and removed death from everyday life. It used to be that when a loved one died, the body would be laid out on the dining room table. We are now terrified of death. We don’t even use that word – we have substituted death with euphemisms like “passing away.” How radical, then, that in our most holy meal we proclaim a death. We don’t hide from it, we glory in it.

While the rest of the world scoffs at our proclamation that God would die and rise again, we eat this bread. While the rest of the world tries to find love in all the wrong places, we drink this wine. See, this meal is defiance. We defy the proud who would trust in themselves. We defy the mighty who think they run the world. We defy death itself, because we proclaim that through death, there is new life. This meal, this Holy Eucharist, is not here to give us fond memories of Jesus. This meal empowers, emboldens us to live with Jesus in defiance of the powers that would break us down and tear us apart. The rest of the world tries to divide us between Democrat and Republican, between rich and poor, among black, brown, and white; the world parses us out even by which subdivision or neighborhood we live in or what kind of car we drive.

Yet this is the night, on which we Christians stand in defiance of all that. We eat this bread, and we drink this wine to boldly proclaim that Jesus is Lord, and that in him, there is no Jew or Greek, there is no slave and free, there is no male and female, there is no progressive, or conservative, no rich and poor, no black, or white, no us or them. Like Shackleton standing on a frozen ice floe, hundreds of deadly miles from safety, we defy everything that stands against us. We eat this bread, we drink this wine, defiantly proclaiming that when Jesus brings us together, it overcomes what would divide us.

Tonight, this very night, I ask you to eat this most holy meal in defiance. Eat this bread in defiance of loneliness when your ship has sunk. Drink this wine in defiance of helplessness when you are stuck on an ice floe, and rescue is a long way off. Come to this holy table in defiance of defeat when you are deserted on a barren island, and it seems that all there is to eat is penguin meat. Boldly proclaim the Lord’s death when life has set ice-covered mountains before you, and you have no GPS.

One thought on “Defiance – A Maundy Thursday Sermon”