Do you remember those dreaded summer reading projects you had in high school? You probably spent the first three quarters of the summer not doing anything then you rushed to be ready for the first day of English class in the fall. The only two books I remember for summer reading were The Grapes of Wrath and Cold Sassy Tree. One was great, the other not so much. I’ll let you wonder which is which.

I’ve been doing a fair amount of reading this summer, but without the dreaded first day of class looming like the sword of Damocles, I’ve been able to savor my reading. As many of us continue in this semi-lockdown and seemingly endless quarantine, I wanted to share with you some of my thoughts on what I have been reading. 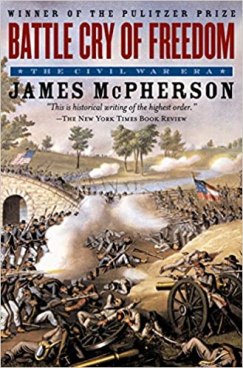 This Pulitzer Prize winner is the gold standard for single volume Civil War histories. In my Civil War history class in college I had read McPherson’s textbook, Ordeal by Fire: The Civil War and Reconstruction, and a few years ago I made it through Shelby Foote’s three volume series on the Civil War. Ordeal by Fire is great if you are looking for something that is laid out thematically and chronologically. Shelby Foote’s series is geared more toward military historians, though it does describe the political and social nature of the conflict, too.

Battle Cry of Freedom is laid out in a narrative fashion, so that the reader grasps the greater story of the Civil War era and the constantly interwoven nature of events on the battlefield, on the home front, and in the political arena. While the serious Civil War reader will not find too much that is new, that is most likely because so many historians have drawn from McPherson’s work.

If you are not interested in making your way through all 867 pages, then I would at least recommend the epilogue and afterword (in the 2003 edition). McPherson offers up an interesting theory of the concept of “liberty” which puts the Civil War not just in the American context, but in the grand sweeping history of civilization. He notes that the Bill of Rights draws from a “negative” concept of liberty. That is, those amendments restrain the government, detailing what it may not do (i.e. freedom from). However, the Reconstruction amendments – 13, 14, and 15 – provide for what the government may do. This is the “positive” concept of liberty (i.e. freedom to).

This is no small matter. McPherson notes that Union was fighting for a “positive” concept of liberty. That is, that the government was using power to create liberty. On the other hand, the Confederacy was fighting for a “negative” concept of liberty in an attempt to restrain federal powers. As the southern economic and social system reflected the hierarchical order of most human societies from history, McPherson hints that the Union was actually the revolutionary force in the Civil War because it was among the leading edge of governments around the world using its power to create positive liberties.

These competing concepts of liberty continue to work themselves out in our modern political debates. As McPherson notes in his final paragraph of the afterword, the civil rights movement of the 1960s held up a positive vision of liberty; that is, the power of government would be used to create more liberties. On the other hand, he notes, the libertarian movement relies on a vision of negative liberty; that is, restraining the power of the federal government.

He sums it up this way:

Now, I do not wish to take a jab at anybody in the modern political debate. I will only say that it would benefit us greatly if we could hold in our mind these two competing and yet essential natures of liberty that are encoded in our governing documents and in our history. In short, that is why the book is entitled Battle Cry of Freedom. Because in that “mighty scourge of war” both sides claimed freedom and liberty as their motivating cause.

A Wrinkle in Time by Madeleine L’Engle, Crosswicks Ltd, 1962

This novel was recommended to me by Kim Faasse, the Director of Children, Family, and Youth Ministries at Holy Comforter Episcopal Church. From there, this young adult book became the Holy Comforter summer reading project. If you would like to watch the webinar that Kim and I held on the book, you can catch it on YouTube.

I was enthralled by L’Engle’s critique of both suburban utilitarianism and communist uniformity. There is one scene in which the children are walking through a neighborhood in Camazotz. All the houses look the same and all the children are playing in the same exact way, except for one little boy who is bouncing a ball out of rhythm.

This theme is intensified in the most critical scene of the book. IT, the power of Camazotz, is forcing its rhythm upon Meg and her companions. “Each time she managed to take a breath out of rhythm an iron hand seemed to squeeze her heart and lungs.”

Suddenly inspired, Meg starts reciting the Declaration of Independence.
“As she cried out the words she felt a mind moving in on her own, felt IT seizing, squeezing her brain.” IT responds, “But that’s exactly what we have on Camazotz. Complete equality, Everybody exactly alike.”

Then comes the kicker. “For a moment her brain reeled with confusion. Then came a moment of blazing truth. ‘No!’ she cried triumphantly. ‘Like and equal are not the same thing at all!'”

Read this scene again and look for the explosive subtlety. IT is trying to squeeze Meg into conformity and she recites the Declaration of Independence because it is “out of rhythm.” Yes! The Declaration of Independence and its radical notion of equality is out of rhythm with the overwhelming experience of human history; that some people are more deserving than others. Think back to Orwell’s chilling line in Animal Farm: “All animals are equal, but some animals are more equal than others.” Again, our vision of human equality is absolutely dynamite when compared with most of human history.

Finally, look for the theme of feminism. Meg, the impulsive little girl, is the heroine. She has faults, but those faults are her saving qualities. And, paradoxically, the child saves the parent. L’Engle was an Episcopalian, but you can tell here that she is faithfully playing with those themes of our faith in order to make us ponder them with deeper devotion.

Say Nothing: A True Story of Murder and Memory in Northern Ireland, by Patrick Radden Keefe, Anchor Publishing, 2019

Maggie and I visited Belfast last summer during my sabbatical. While I had a vague notion of what the Troubles were all about, our time there captured my imagination. I was shocked to find that the gates between Catholic and Protestant neighborhoods are still locked at night. The murals all throughout the city are tangible reminders that, in the words of William Faulkner, the Troubles “are not history, they’re not even past.”

Like many journalistic histories, this book paints a big picture – the Troubles, the IRA, Sinn Fein – by telling a little story – the disappearance of Jean McConville.

Admittedly, it is difficult to keep track of all the little stories that Keefe weaves throughout the narrative. Do not fear. If you lose track of a minor character here or there, forgive yourself and keep reading. More than anything, I found this story to be an exploration of the human soul. You will read stories of betrayal, perseverance, ruthless brutality, absolute despair, and political cunning.

Keefe’s genius here is to make you have mixed feelings about some of the notorious characters in the IRA. For instance, I found my heart breaking at the images of Brendan Hughes chain smoking and drinking his way to death as he reflects on the ways he was betrayed, though I was also repulsed by his violent past. I sympathized with Dolours Price’s mental illness and food issues after her hunger strike, but I was horrified by her participation in one of the most lethal elements of the IRA. And, most importantly, I found myself disturbed by Gerry Adams, a man who denies having ever worked with the IRA and who helped draft the various peace treaties. Like Robert Earl Keen sings, “we live and die by shades of gray.”

All that being said, do not go into it thinking that this book will be a comprehensive history of the Troubles. As the author recognizes, little attention is given to loyalist paramilitaries. But then again, this is a story about a woman who was disappeared by the Irish Republican Army and the continuing impact of her story on Sinn Fein.

The New Testament in its World: An Introduction to the History, Literature, and Theology of the First Christians, by N.T. Wright and Michael F. Bird, Zondervan Academic, 2019

After graduating from seminary, I committed to reading one survey of the New Testament every ten years. I graduated in 2010, so here we are. The New Testament in its World is reliable survey authored by one of the world’s foremost New Testament scholars, N.T. Wright. It is clear from the very beginning that this is a condensed version of Wright’s longer series, Christian Origins and the Question of God. As I have read all the volumes in that series, nothing in this single volume survey stood out to me as groundbreaking.

That being said, it was a great refresher on some of the historical background on the world of the New Testament. Part II of the book, “The World of Jesus and the Early Church,” was especially helpful. If you are looking for good outline of the people, parties, and ideas at play in the New Testament, this is the place to start. This particular part of the book describes the political forces, the various Jewish sects, and the wider Hellenistic culture during the time of Jesus and the early church.

I’ve also turned to this book as I prepared lessons for Holy Comforter’s parish wide reading of the Gospel of John and in my weekly preaching. It’s a big book and it’s not cheap, but if you don’t have a single volume survey of the New Testament, this could be the right one for you.